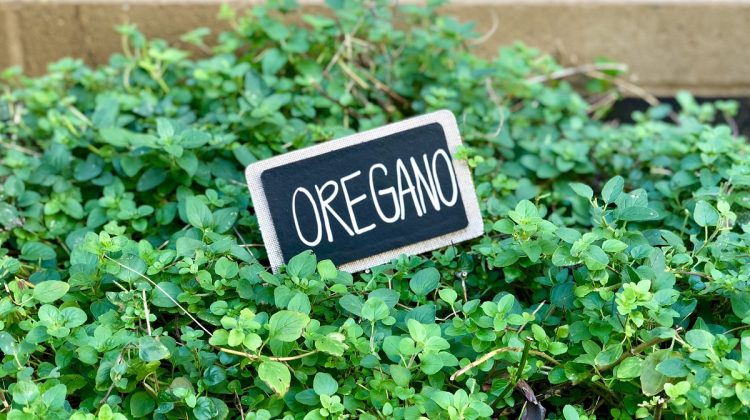 Learn all about the culinary herb oregano.

How to grow, harvest and preserve oregano in the garden. Plus an easy oregano dipping oil recipe plus more cooking tips and ideas.

Oregano, sometimes called ‘pot marjoram’ has a strong warm flavor popular in Italian and Mediterranean cuisines. It is a perennial herb that can grow to over two feet tall and three feet wide, so give it a bit of room in the herb garden.

Oregano is native to the Mediterranean region, so does well in a drier climate. Once established in the garden, oregano does not need frequent watering making it easy to care for the herb.

It has oval grayish-green leaves and a bushy growth habit. White or pink flowers appear in the fall as the herb goes to seed.

Oregano prefers a sunny location with well-drained sandy soil and a sheltered location. It is a hardy herb though and can adapt to almost any condition. In fact, the flavor is strongest when grown in poor soil conditions.

Oregano does well as an indoor plant if given enough light. It can also be grown easily in a container herb garden.

Plant oregano outdoors in the early spring when the soil can be worked. Space young plants 12-18 inches apart or based on the plant tag when growing different varieties.

As the plant matures, it can be transplanted to allow for additional growth.

Oregano can be propagated from seed in the spring. Start seeds indoors in late winter or directly in the garden in the springtime. Seeds should germinate in 5-10 days. At about six weeks old, cut oregano seedlings to about 1 inch tall. This will encourage lush, bushy growth.

Oregano can also be propagated from stem cuttings or root division. Older oregano plants may need to be replaced after 3 years or so as they tend to be woody with age. Cut back older plants in the spring to encourage fresh growth. Don’t overwater established plants.

Italian Oregano is the most common form found in garden centers.  It has a bushy growth habit of about 2 feet tall.

Greek Oregano has slightly pointy leaves and is slightly shorter at 1-2 feet tall.

Hot & Spicy Oregano is a variety that works well in Mexican dishes.  It can also be used as a substitute for common oregano in smaller quantities due to its stronger flavor.  It is a shorter variety growing just 12 inches tall.

Where to Buy Oregano Seeds and Plants

Oregano seeds and plants are commonly found in most garden centers or home improvement centers.  Some of the more unique varieties are more easily found through online vendors such as Burpee Gardening or Cook’s Garden.com

Both fresh and dried oregano are used heavily in cooking. Dried oregano is found in many seasoning blends, condiments, and herbal rubs.

Oregano is a robust herb that can withstand higher cooking temperatures, unlike its cousin Marjoram.

Dipping bread in herb-flavored oils is often reserved for restaurant eating. You can make a similar appetizer for friends or family by using this easy recipe.

If you don’t have a mortar and pestle, you can use a fork to blend the ingredients.  Letting the oil sit overnight will intensify the flavors having a similar effect as crushing the leaves.

Harvest oregano throughout the growing season to keep the plant bushy. This will also prevent early flowering.

Snip branches at a leaf node to encourage more branches to form. Harvest oregano early in the morning on a dry day for the best results.

Oregano retains most of its flavor when dried.

Oregano can also be stored in oil or water then frozen in ice-cube trays. This is a great way to preserve oregano that will be added to soups or sauces.

The medicinal properties of oregano have been known for centuries. It is well known as a remedy for fevers, treating coughs, colds, and flu-like symptoms. There are oregano-based teas made for indigestion, bloating, and bronchial problems.

The essential oils of oregano are thought to have antimicrobial and antioxidant properties. Herbal products using oregano oil have been created to treat respiratory infections as well as gastrointestinal ailments.

Oregano is a good source of Vitamin K and contains fiber, iron, manganese, and vitamin E.

🌻 On some of our pages, we link to products you might find interesting. 🌿 If you buy them, we get a small share of the revenue from the sale.

Unique Gifts For The Gardener

More Posts from this Category

As an Amazon Associate, I earn from qualifying purchases.

This website uses affiliate links and may receive a commission if you purchase products. Learn more on our Affiliate Disclosure page.