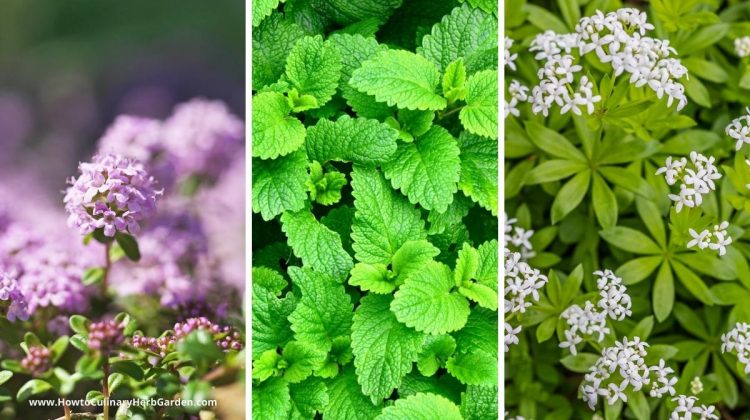 Your herbs don’t have to be confined to a specially designated herb garden.  Some will double as ground covers in lawns, under trees, or even in your vegetable garden.

Some herbs (and other edible plants) can be used as a substitute for lawn grass—you can walk, lie, work, and play on them and they’ll keep growing.  There are several good reasons to replace an existing lawn with herbs. Herbs may require less water than lawn grass, and they also provide fragrance, flavor, and health benefits.

Plants that won’t stand up to heavy foot traffic may be grown as ground covers to prevent erosion on terraces or steep slopes. Or you can plant them under and around trees and shrubs, rather than having to constantly weed or mulch those areas.

Ground-covering herbs can also be incorporated into your vegetable garden.  Planted in paths, around borders, or on the steep slopes between terraced beds, they may attract pollinators, repel pest bugs, and provide other benefits.

If your ground cover is an aggressive spreader you may have to keep tearing it out of the edges of your beds, so keep this in mind when planning.  You may also be able to use low-growing ground-covering herbs as living mulches in vegetable beds under tall vegetable plants.

This requires considerable care and thought since most ground-covering herbs are perennial and most garden vegetables are annual.   See notes below on companion planting.

8 Herbs to Grow as a Groundcover

“Ground cover” can mean several different things when planning your landscape. You may choose to replace a lawn, crowd out weeds or help to prevent soil erosion. Here are eight herbs that serve one of these functions in our gardens.

Roman chamomile, (Chamaemelum Nobile), not its annual relative German chamomile, which grows well in zones 6-8, makes a solid perennial turf. You can walk on this once it’s well established.

Sarah Garland says in The Complete Book of Herbs and Spices that chamomile lawns were common in Britain before grass lawns were introduced in the 1700s. Chamomile’s sweet scent is a pleasant bonus.

Chamomile flowers can be used medicinally and for flavoring (link to your article on chamomile), but chamomile makes a better turf if the flowers are removed. Garland recommends staying off the turf until plants are well established, and then walking on them and rolling them regularly. Roman chamomile will grow either in partial shade or in full sun.

Chamomile is a good companion to onions, cabbages, and aromatic herbs.

Lemon balm, (Melissa officinalis), is a thickly growing fragrant perennial that will thrive in either sun or partial shade.  It’s too tall and soft to plant in places with regular foot traffic, but I’ve found it a good ground cover under trees where mowing or mulching would be a nuisance.

Its leaves add a refreshing flavor to teas, desserts, and other foods.  Lemon balm grows well in zones 4-8.

Mint, (Mentha spp) is a fragrant, flavorful edible, and medicinal herb.  Like lemon balm, it probably won’t substitute for lawn grass, but it will grow thickly and choke out weeds in places where you’re not wanting to walk regularly.  It will also thrive in partial shade, unlike most ground covers.

Mint can be a good companion to cabbages and tomatoes. But it’s also a very persistent spreader that can easily take over your garden, so plan wisely.

Oregano (Origanum species) is often mentioned in lists of herbal groundcovers. Creeping varieties of oregano will adapt better to lawn conditions, or to growing under or alongside vegetables in gardens.

Oregano is a good companion plant for beans, brassicas, cucumbers, grapes, peppers, pumpkins, and tomatoes. The Payne County Master Gardeners especially recommend it as a ground cover under pepper plants.

I planted some of our upright oregano on a steep dry sandy little slope on our lawn, where it spread and grew and didn’t seem to mind being frequently mowed. We didn’t walk on it much due to its steepness.

Oregano comes in many varieties, some of which will grow in zones 6 to 9.  Many different types can be used in cooking.

Rosemary, (Rosmarinus officinalis), is a fragrant edible, and medicinal herb with many different cultivars. Some creeping varieties, such as Prostratus, can make good ground covers. Rosemary generally grows well in zones 7-9.

One master gardener reports that the upright, shrubby rosemary types are hardier, but trailing rosemary is hardy above 20 degrees. It prefers full sun and well-drained soil.

Creeping rosemary will be less winter-hardy in heavy clay soil than in light sandy soil. Various master gardeners recommend planting rosemary on steep banks to help control erosion. It may not stand up to much foot traffic.

Rosemary is a good companion plant to beans, cabbage, carrots, and sage, and is generally good for deterring pests.

Thyme, (Thymus spp), is a low-growing dense perennial with many varieties growing in zones 3-8.  Creeping thyme, (T. serpyllum), is especially good to use as a ground cover for paths, lawns, and seats. Creeping thyme will stand up to light foot traffic.

My common thyme has escaped from my herb garden and taken over some parts of the lawn on which my family often walks, and the thyme does quite as well as the grass does.  Its blossoms attract bees, which can be a problem if you like to walk barefoot.  Low and frequent mowing might prevent this.

Some master gardeners say lemon thyme has fewer blossoms than other varieties which is another option.

Thyme leaves and blossoms are used in cooking and for medicines. Thyme is also a valuable companion plant (link to thyme companion planting article), especially for brassicas, eggplants, potatoes, tomatoes, and strawberries.

Thyme thrives in full sun and on poor soil and is quite drought tolerant.

Woodruff will spread thickly and outcompete weeds, though it won’t stand up to heavy foot traffic.

Yarrow, (Achillea millefolium), has leaves that are used both in salad and for medicine.  It’s also a tough plant that outcompetes weeds well and requires little water; in fact, it prefers well-drained soil.  You can choose to grow it as an alternative to grass lawns or mix it in with grass.

Yarrow is a good all-purpose companion plant, attracting beneficial insects and repelling some pest bugs.  It’s also said to intensify the aromatic oil production of other plants nearby

Strawberries can provide an erosion-controlling ground cover as well as fruit. The varieties suggested as ground covers by various nurseries and news articles are small-fruited varieties, not the kind you’d usually grow in your garden.  These may be called alpine strawberries, wild strawberries, or native strawberries

Fragaria vesca and Fragaria virginiana are among the species that may make good ground covers. Their fruit is sweet as well as being small. One nursery describes them as soil-binding ground covers but doesn’t specify how much foot traffic they’ll stand.  The wild strawberry patches near my house grow and thrive despite my crawling over them often while the berries are ripe.

One Extension site describes beach strawberries, Fragaria chiloensis, as an effective ground cover/lawn substitute with berries that are “edible but not tasty.” They say that beach strawberry can be walked on without damage, though it doesn’t form a smooth carpet.

Wild ginger, Asarum canadense, is a shade-loving groundcover than grows in zones 3-7.  It isn’t the usual culinary ginger, but the Clemson Extension office says that its root does have a pleasantly spicy ginger flavor and can be used in cooking.

Nasturtiums are edible flowers that grow in dense carpets.  You wouldn’t want to walk on these, but they could cover ground on a slope. They also work well when planted under tall garden vegetables. Since nasturtiums are annual, they don’t pose the same challenges as perennial herbal ground covers.

Various vegetables will spread rapidly and provide an annual cover on patches of bare soil, though they won’t stand up to foot traffic.  Sweet potatoes, pumpkins, squash, and melons all produce huge vines covered with large leaves that effectively shade out weeds and cover the ground.

Tips for Using Herbs as a Groundcover

However tough and resilient your ground cover will be in the end, it will probably need some help while getting started.  This is especially true of plantings from seed.  Keep these weeded and watered and don’t walk on them until they’ve formed sturdy mats.

Transplants may be more resilient. If you divide established oregano or thyme plant and set a healthy chunk of it into a new space, it may require less care as it spreads.

Consider the site where you’re planting.  Choose a plant that will work well with the soil type, drainage, and amount of light you have available. Also, consider what borders your plantings.  You may not want to put very aggressive spreaders like mint or thyme next to more delicate plants that you don’t want to be overwhelmed.

Herbs and other edible plants can provide a useful and fragrant substitute for grass lawns or for non-living mulches.  Choose and site your ground cover with care, take notes on what works and what doesn’t, and design a ground-covering system that works for you.

🌻 On some of our pages, we link to products you might find interesting. 🌿 If you buy them, we get a small share of the revenue from the sale.

Unique Gifts For The Gardener

More Posts from this Category

As an Amazon Associate, I earn from qualifying purchases.

This website uses affiliate links and may receive a commission if you purchase products. Learn more on our Affiliate Disclosure page.